Originally I felt like the entire third act was missing from the film. Theo and Key finally escaped the madness of their world to arrive at the meeting spot for their savior ship, The Tomorrow. Theo dies just as the ship emerges from the fog…and then the film ends. It was frustrating to me on my first viewing because I really wanted to know what was on that ship and whether or not Key was able to foster some sort of change in the global epidemic of infertility.

I wanted to know what happened next.

But then several comments were added to my article (particularly from reader Mia) that caused me to reconsider my original interpretation. Perhaps the film was complete, and it was—from a certain perspective, but I still had difficulty in resolving my original disconnect. It seems that after the initial viewing many audience members feel like something is missing, that the last third of the film has yet to be explored. This changes with repeated viewings and with a better understanding of what the story is, and what it isn’t.

To explain, I’ve added back in the reader discussion that was generated the first time around.

Read the rest of the article 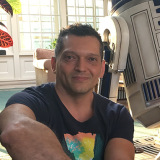 Story artist and StoryboardArt.org Co-founder
You can see more of his work at www.sergiopaez.com